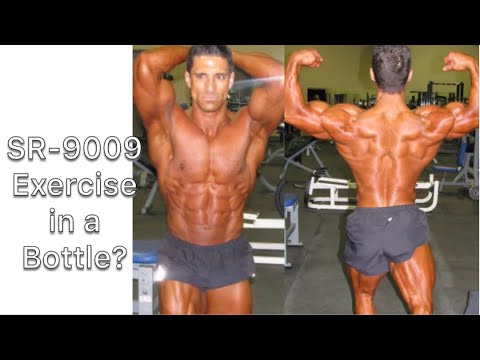 WHAT IS PUMPING IRON STENABOLIC?

SR9009 (dubbed as ‘exercise in a bottle’) is often described as an exercise mimetic that works by increasing mitochondrial function in muscle cells which in turn supports increased metabolic function as well as enhanced fuel utilisation in the body. With the potential to positively affect both endurance/cardio performance as well as supporting your weight loss goals, SR-9009 opens up a new frontier in ergogenic supplementation.

SR9009 has the ability to affect weight loss without dieting, according to a 7-day study on mice. It also has been shown to reduce the amount of cholesterol, triglycerides, insulin and free fatty acids shown in diet-induced obese mice. Whereas, genetically obese mice stopped gaining weight within 12 days of being injected with this compound and all without their insulin tolerance or glucose levels being affected.

Research has shown SR-9009, Stenabolic, stimulates the Rev-Erb protein which has an effect on circadian rhythms, fat-storing cells as well as glucose and lipid metabolism. Research has shown that activating Rev-erb protein increases cell production through mitochondria giving the muscle increased energy as well as giving the metabolism enhanced speed. Thus increasing the mitochondria in the muscle will result in strength gain as well as drastic energy increase to go along with strides in endurance.

Studies also show that Stenabolic can increase all-around endurance due to increases in mitochondria count. The biggest component that SR-9009 research shows is that it boosts metabolic activity and is known to mimic aerobic exercise without having to actually exercise hence being called “exercise in a bottle”. Research shows SR9009 uses body fat that is stored and uses it as energy for exercise.

Animal and cell studies that have been done on SR9009 show that:

HOW DOES PUMPING IRON STENABOLIC WORK?

While it’s widely marketed as a SARM, SR9009 is essentially a Rev-erb-a agonist. It binds itself to the Rev-erb-a protein molecule and not only activates, but it also amplifies its effects, setting off a series of actions in the human body. Rev-erb-a is a natural molecular structure that controls the metabolism of fat and glucose in the liver and cycles out dying cells. It is also a key physiological regulator of mitochondrial content and oxidative function.

Therefore, the activation of Rev-erb-a through pharmacological drugs such as SR9009 is a promising approach for the management of compromised exercise capacity as well as skeletal muscle diseases. It is for this reason that Sr9009 or stenabolic has become quite popular with the bodybuilding community due to its fat burning and endurance-boosting capabilities.

When the amount of REV-ERB reduces in your body, you are more likely to have problems with both metabolic and cardio/muscle activity.  SR9009 can be of great help. When you take SR9009, a number of things happen, including:

Studies reveal that the drug helps reduce cholesterol by 47%, plasma triglycerides by 12%, plasma non-esterified fatty acids by 23%, plasma glucose by 19%, and plasma insulin level by 3%. In other words, SR9009 minimizes the amount of cholesterol and fat stored in the body and burns off glucose and fat that is stored in the muscles.

There are currently no known side effects of SR9009. Mice research results don’t indicate any signs of liver toxicity but some have reported cases of insomnia. It does not interfere with your body’s natural hormones so there won’t be any suppression. This means you won’t require a PCT.

HOW TO USE PUMPING IRON STENABOLIC

It’s often recommended to cycle Pumping Iron Stenabolic for 8 weeks followed by 8 weeks off. If you follow this protocol, it’s guaranteed that you will keep making results.

If you haven’t used Pumping Iron Stenabolic before you could start out with a lower dosage of 10 to 20mg a day for the first 1-2 weeks, then eventually increasing to 20-30 mg per day.

Take into account that SR-9009 has a very short half-life of 4 hours which means you’ll need to split the dose and spread it out 2-3 times throughout the day to maintain stability. This will ensure you get the best out of your Stenabolic cycle.

There are no reviews yet.